Recently, I’ve been making a more concerted effort in learning R. One of the major hurdles I’ve had to overcome in order to do this was to move from tutorials and to doing more independent work. This can be quite a difficult thing to do, particularly if it isn’t immediately obvious how using R or another programming language can be relevant or beneficial to your work. As a current student who has had very limited coding experience in my current courses and has had to learn coding almost exclusively through self-study, this has been particularly the case.

Once I came across the #tidytuesday hashtag on Twitter and the associated community that participates in this event, doing visualisations without directly following a tutorial become much easier. Having a helpful community as well as a pre-selected source of data to work with each week helped to establish a routine, another key element of establishing a coding practice. As well as having a routine, being able to see experienced R users’ graphs and code and being able to reach out to them for tips has been invaluable in breaking through plateaus I had previously been stuck in.

To date, I’ve only done a couple of visualisations, and relatively simple ones at that. While functional and readable, they’re not overly attractive and appealing. However, having some legible pieces of independent work to show off as the beginning of a portfolio is satisfying as well as a confidence-booster. It’s an indication that I’m going in the right direction and the effort I’ve put into practicing R is yielding results. 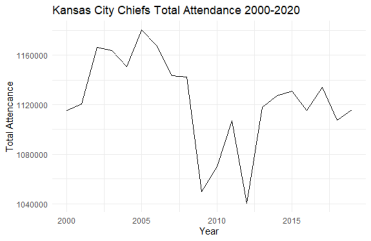 There are, of course, many different online communities for all manner of programming languages that one may be interested in learning. With social media and online communities becoming ever more important and ubiquitous for professional development and networking, finding a like-minded community such as that associated with #tidytuesday or #rstats on Twitter may be the step for you to go beyond tutorials and to start working on independent coding tasks and projects.

For those interested, the code to my graph for the Kansas City Chiefs’ total attendance can be found at my GitHub profile.